Oudsbergen has presented the plans for the new multifunctional sports complex in the municipality of Opglabbeek. The new sports hall will be twice as large as the previous one. In addition, the sustainable building will also have room for dancing, popular sports and soccer. Sport Flanders supports the project with a 1 million euro subsidy. The project was won by Cordeel Zetel Hoeselt together with Slangen and Koenis, VK engineering & architects, Ney & Partners WOW and Ontwerpatelier Peter Jennes..

The AGB Oudsbergen started looking for a partner to design and build the new sports hall and maintain the technical installations during the first five years. In the recent period, the various candidates were weighed. On July 6, the Board of Directors of the Autonomous Municipal Corporation of Oudsbergen was proposed to award the contract to the Cordeel consortium.

It was clear that there was a need for a new sports hall in Opglabbeek. In 2018, a needs analysis was developed together with the sports associations and the sports council. "The current sports hall was built almost 45 years ago and although it was partly renovated and beautified, it is outdated. Moreover, the sports hall has never been expanded in all that time. There is too little suitable and available sports surface to allow all clubs to train and play games optimally in the current accommodations," says Ilse Wevers, alderman for Sport. The analysis also yielded some recommendations. "It was suggested that the sports hall be looked at as part of a sports zone, where outdoor sports could also be offered."

The administration went to work with the recommendations and involved various parties in developing the plans through an extensive participation process. "That resulted in a plan for the entire sports zone and now also the design of the new sports hall. And that design looks fantastic," says Kurt Plessers, alderman for Patrimonium. The new sports hall and sports zone excel in polyvalence. "The sports hall is twice as large as the previous one and can be divided into 6 separate parts. Furthermore, 3 large dance halls are provided."

Facilities for outdoor sports enthusiasts are also provided in the new multi-purpose sports complex. Soccer club Kabouters Opglabbeek rents dressing rooms and a cafeteria, which will also be used as a VIP area for indoor sports. On the ground floor, in addition to a main cafeteria for the sports halls, there is also a cafeteria for popular sports such as petanque, skittles and archery. This cafeteria will also serve as a service center for senior citizens.

A real sports zone is thus being created. "The new sports hall will provide a new home for the Kabouters and the users of the Zeelke. The popular skate park will also soon be expanded and slow connections will be provided throughout the site, which will also be able to reach the tennis club," says alderman Wevers. In addition, a multi-purpose sports field, calisthenics park and beach volleyball courts will be built. Some 200 parking spaces and a bicycle shed will be provided.

The new sports hall will be a lot more energy efficient than the previous one. "The building achieves at least an E-level of 50, but with a few interventions, it will eventually be possible to achieve E30 or even E0. We have great climate ambitions and have chosen not to use fossil fuels. Energy is generated via heat pumps and solar panels," explains alderman Plessers. "The supporting structure is made of wood and can therefore be completely recycled later on. The rainwater is collected and reused. Green roofs are installed on small spans." Space is also being used efficiently and sustainably: three outdated buildings are being housed in one new and energy-efficient building.

The new sports hall will be built next to the current sports hall. "We will ensure that the associations will be able to continue their operations during the construction work. The sports hall and 't Zeelke will not be demolished until the new sports hall is ready," says alderman Wevers.

In the coming months, the designs will be finalized and the necessary permits applied for. "We expect that the works can start in the spring of 2023. The construction of the sports hall will take about a year, although it will take a little longer before the parking lots and plantings are also completed," says Alderman Plessers. On the site, work will already be done before then: the grounds of Kabouters Opglabbeek will be adapted, the skate park will be expanded and in 2023, a multifunctional sports field and beach volleyball courts will be built and calesthenics equipment will be installed. 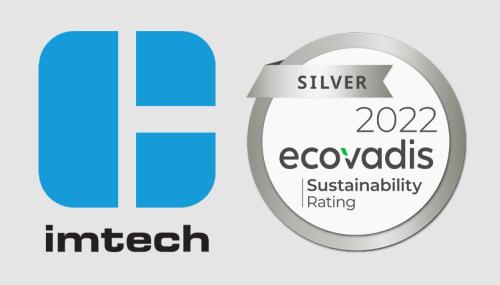 Imtech recently reached a silver rating by EcoVadis for its sustainability efforts. We scored 60 out of 100 possible points, which means that we score equal or higher than 80% of the companies that have been evaluated on EcoVadis. A great result for our continuous work on the four EcoVadis pillars: environment, labor & human rights, ethics and sustainable procurement.

The energy transition is moving on at a swift pace, also in the market of electric charging stations. Due to the large increase in EVs and hybrid cars, charging infrastructure providers can barely keep up with demand, resulting in long waiting times. In order to cope with this shortage and to further expand the current offering with high-quality hardware, Powerstation has partnered up with Volt Time. 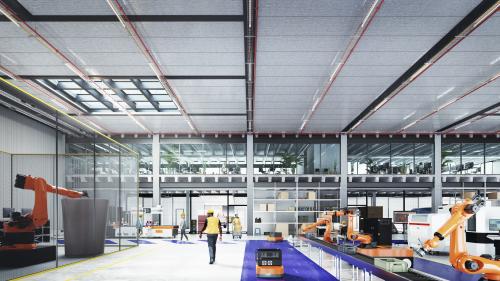 On Friday 21 October, the foundation stone of FacThory, a multifunctional building for smart manufacturing companies, was laid at Thor Park in Genk. Thor Park, LRM (Limburgse Reconversie Maatschappij), stad Genk and KU Leuven jointly laid the foundation stone, which was replaced by a 3D-printed version for the occasion. 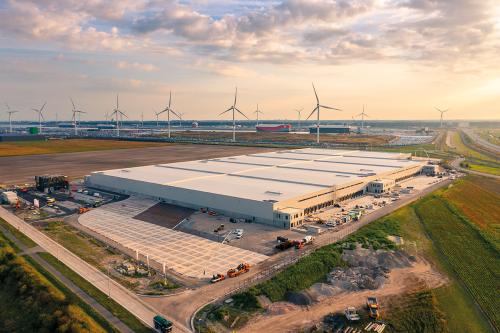 Zeebrugge Green Logistics, formerly better known as Lingang*, was commissioned on Friday 30 September 2022. The official opening took place on 12 October. This sustainable, state-of-the-art logistics site of over 73,000 m² in the port of Zeebrugge comprises 10 warehouses with 10 loading docks each, a container yard, an office building and spacious parking. 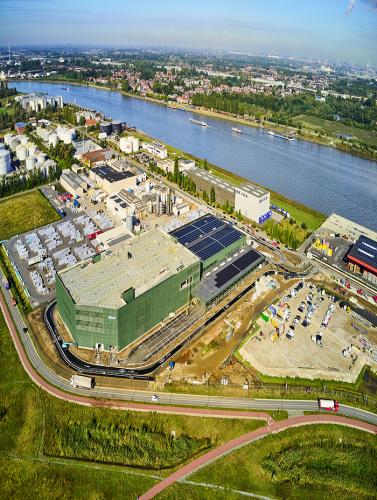 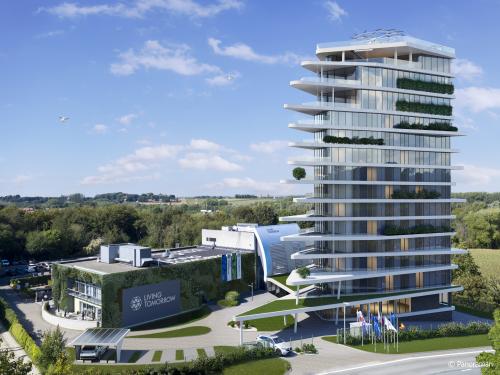 The construction of the new Living Tomorrow innovation campus in Vilvoorde is entering the next phase: the top (12th) floor is finished, bringing the impressive tower to its maximum height of 49 metres. ‘Vertical construction, with the smallest possible footprint on the ground and as much space for greenery as possible, is the way we will (have to) go in the future,’ Frank Beliën, founder and chairman of the Living Tomorrow Group, tells us. 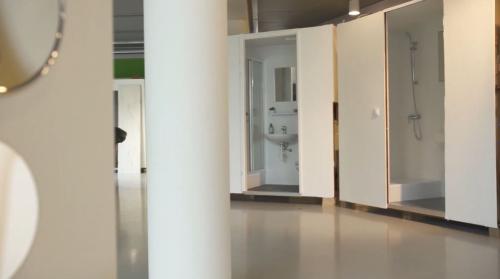 Cordeel Group is proud to announce that it has acquired Off Site Belgium, a leading Belgian manufacturer of modular bathroom units, supplying thousands of prefabricated bathrooms every year to major main contractors and developers. The company offers an extensive range for all sectors and budgets, from High Pressure Laminate (HPL) units to fully tiled bathrooms. 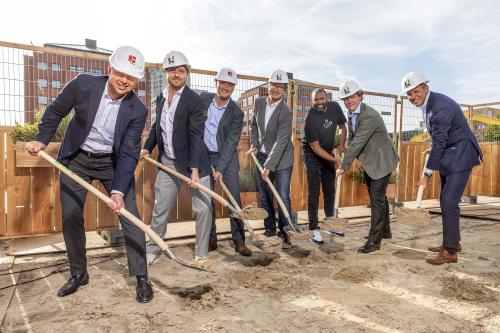 Construction of 'The Ensemble' in Amsterdam gets underway

On Karspeldreef, located in the new Amstel III urban district, Cordeel has started construction work on 'The Ensemble', a complex consisting of 592 rental homes, 20,000 m² of offices and underground parking for 2,350 bicycles, 120 scooters and 239 cars. In addition, a health centre and talent house for young people as well as some commercial spaces will house there.
To news